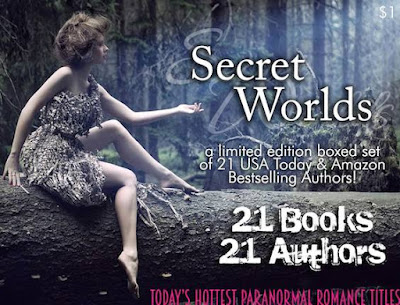 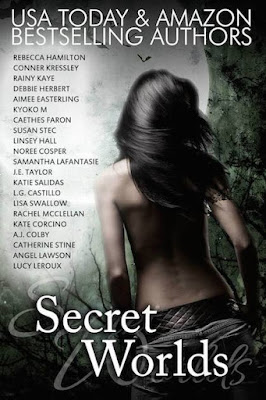 Secret Worlds is a HUGE boxed set ebook collection for lovers of dark fantasy and paranormal romance from twenty-one popular authors of the genre, including Catherine Stine, a member of Untethered Realms.

Supernaturally thrilling and engaging, this boxed set has it all: ghosts, vampires, mind-readers, shapeshifters, demons, faeries, werewolves, hybrid beings and more.
For a limited time, enjoy books from today's USA Today, Amazon Bestselling and award-winning authors, including titles slated for the big screen. When purchased separately, these books cost over $50. But they are yours today for less than $1.
Get a flavor of the novels and novellas in the collection:

Taken by the Beast by Conner Kressley and Rebecca Hamilton
Women are going missing. Women who look a lot like Charisse. And the man this beauty is falling for may be the beast responsible.

The Forever Girl by Rebecca Hamilton
Sophia's ancestor's body went missing during the Salem Witch Trials, and the only one able to help solve the mystery is a shapeshifter Sophia is afraid to trust

Purgatory by Susan Stec
A sex-hungry myth with no name, no flesh, and no identity ...unless it wears one of you.

The Pandora Principle by Noree Cosper
As a descendant of Pandora, Cassi must discover if her lover is one of the evil spirits she hunts before all her friends die.

Changeling by Debbie Herbert
As a changeling and a witch work together to restore order in Fairy, they discover that love, like magic, casts its own spell of enchantment.

Shiftless by Aimee Easterling
After years of suppressing her inner predator, Terra meets a shifter who forces her to reclaim her wilder side.

The Black Parade by Kyoko M.
Poltergeist Michael is the key to saving Jordan's soul from hell, but can she handle the cost of her salvation?

Haunting Echoes by Caethes Faron
Will Amaia's vampire clan kill her ex-fiance before she learns whether he returned from the grave for love or revenge?

Braving Fate by Linsey Hall
Diana and Cadan fight demonic forces and a deadly passion that has lasted centuries.

Trinity Rising by J.E. Taylor
Damian and Naomi are desperate for victory against the devil, but one wrong step couldtrigger Armageddon.

Moonlight by Katie Salidas
Good girls don't wear fur, fight over men, or run around naked, howling at the moon. But Fallon's not a good girl.

Lash by L.G. Castillo
Lash, a fallen angel, must choose where to place his trust--in a home he fought so hard to regain or in a forbidden love he can't bear to lose.

Between by Lisa Swallow
Alek could kill Rose with a kiss. Finn, with a touch. Pulled into an intense affair with Alek, Rose discovers her connection to Finn threatens them all.

The Devil's Fool by Rachel McClellan
When vampire Boaz gives Eve the one thing she never had--love--she falls into a world of greed and seduction.

Spark Rising by Kate Corcino
A runaway Spark and the agent arresting her ignite a revolution to end their people's enslavement while resisting the electricity between them.

Ruby's Fire by Catherine Stine
On the run from a desert cult, Ruby must choose which handsome stranger to trust with her heart and her darkest secret: Armonk or Blane.

Cursed by Lucy Leroux
Governess Isobel Sterling has been hiding an uncanny ability her whole life--until she has to use it to save herself from a madman.

Hunted by A.J. Colby
With Agent Holbrook's help, Riley races time to stay ahead of a crazed werewolf killer.


Ari stumbles into a world of crime and vigilantism while discovering the one man that sets her heart on fire.