We're Baaack!!!
It's time for the Prah & Constantine
February Review. 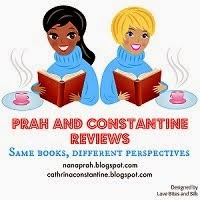 Together we chose Moonless by Crystal Collier

MOONLESS is Jayne Eyre meets Supernatural! In the English society of 1768 where women are bred to marry, unattractive Alexia, just sixteen, believes she will end up alone. But on the county doorstep of a neighbor’s estate, she meets a man straight out of her nightmares, one whose blue eyes threaten to consume her whole world—especially later when she discovers him standing over her murdered host in the middle of the night. Among the many things to change for her that evening are: her physical appearance—from ghastly to breathtaking, an epidemic of night terrors predicting the future, and the blue-eyed man’s unexpected infusion into her life. Not only do his appearances precede tragedies, but they’re echoed by the arrival of ravenous, black-robed wraiths on moonless nights. Unable to decide whether he is one of these monsters or protecting her from them, she uncovers what her father has been concealing: truths about her own identity, about the blue-eyed man, and about love. After an attack close to home, Alexia realizes she cannot keep one foot in her old life and one in this new world. To protect her family she must either be sold into a loveless marriage, or escape with the man of her dreams and risk becoming one of the Soulless.

Ms. Collier is a talented and gifted writer. Toward the end of the book, she definitely had me swiping the pages pretty darn fast.

I must admit, in the beginning I was slightly confused of what was transpiring. And the main character Alexia seemed wimpy, however, she did grow a backbone which was excellent. As I read further and learned the premise of the supernatural theme, I was quickly on board.

The mysterious blue-eyed man had me drooling a little, and the fervent love scenes between Kiren and Alexia were sweet.

Ms. Collier penned a thrilling historical romance and whetted my appetite with a genre I also love, the supernatural. I would recommend Moonless to readers.

Now Let's head over to Nana Prah's Review of Moonless.