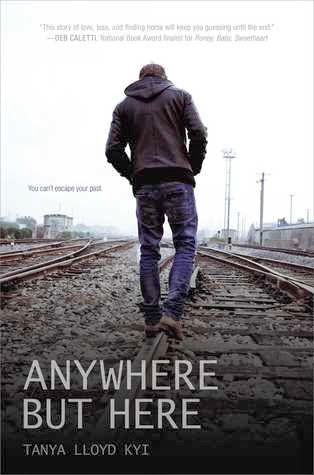 in this fresh and moving debut novel that balances

loss with humor.
Ever since his mom died, Cole just feels stuck. His dad acts

like a stranger, and Lauren, his picture-perfect girlfriend of

his dad, so Cole breaks up with Lauren. She doesn’t take the

news very well, and Cole’s best friend won’t get off his case

about it.Now more than ever, Cole wants to graduate and leave his

small, suffocating town. And everything is going according to

plan—until Cole discovers the one secret that could keep

filled with mental anguish, though, hides his feelings

through his chaotic thoughts. After the debilitating death of

his mom, Cole is floundering, full of depression and doesn't

know how to manage his life now that she's gone. He

life will somehow get better. While reading Anywhere but

Here, I chuckled, I groaned, and I shook my head and

wanted to knock sense into Cole. I cringed and felt his pain,

especially as he hides his innermost feelings. With only a

father who's on a year bender, there's no family for him to 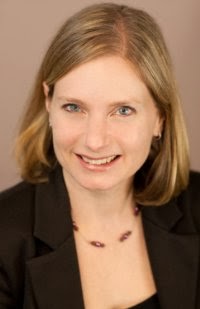 Tanya grew up in Creston, B.C. She began her writing career as a high school poet, producing pages and pages of work that her mother loved and her best friend religiously archived (possibly for a future blackmailing scheme).

She enrolled in creative writing at the University of Victoria, intending to specialize in poetry. She soon found herself out of place among talented but pale people dressed all in black, who seemed to exist entirely on coffee. She elected to specialize in non-fiction instead. After completing her degree, she worked as a graphic designer for several years before switching to full-time writing.
Tanya now lives in Vancouver, B.C., with her husband Min, who claims to be the world's only Burmese occupational therapist. They have two children.
Since 2001, she's written more than 15 books for middle grade and young adult readers.