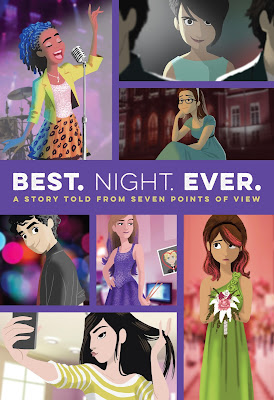 Love Actually meets Adventures in Babysitting in this hilarious novel written by seven authors about seven classmates who are preparing for a crazy night at their middle school dance.

Lynnfield Middle School is prepped and ready for a dance to remember, including an awesome performance from Heart Grenade, the all-girl band who recently won a Battle of the Bands contest. Seven classmates—Carmen, Genevieve, Tess, Ryan, Ellie, Ashlyn, and Jade—intend to make the most of the night…or at least the five of them who are able to attend do. The other two would sacrifice almost anything to be there.

One thing’s for sure—this entire crew is in for one epic night! Gail Nall, Dee Romito, Rachele Alpine, Ronni Arno, Alison Cherry, Stephanie Faris, and Jen Malone have created a charming, hilarious, and relatable novel that’s perfect for anyone who can’t wait to dance the night away.

One of Rachele Alpine’s first jobs was at a library, but it didn’t last long, because all she did was hide in the third-floor stacks and read. Now she’s a little more careful about when and where she indulges her reading habit. Rachele is a high school English teacher by day, a wife and mother by night, and a writer during any time she can find in between.  She lives in Cleveland, Ohio where she writes middle grade and young adult novels. Visit her at RacheleAlpine.com.

Ronni Arno Blaisdell is the author of Ruby Reinvented. She has written for several magazines, blogs, and websites. In a previous life she worked as a publicist in Hollywood, and eventually built a home in Maine. She is a keen SCBWI member and contributor to the KidLiterati.com blog. Visit her online at ronniarno.com.

Alison Cherry is the author of the YA novels Red, For Real and Look Both Ways, and the middle grade novels Willows vs. Wolverines and The Classy Crooks Club. She is a professional photographer and spent many years working as a lighting designer for theater, dance, and opera productions. This whole “writing books” thing is just a cover for the international crime ring she runs out of her Brooklyn apartment. (Shhh, don’t tell.) Visit her online at AlisonCherryBooks.com.

Stephanie Faris knew she wanted to be an author from a very young age. In fact, her mother often told her to stop reading so much and go outside and play with the other kids. After graduating from Middle Tennessee State University she somehow found herself working in information technology. But she never stopped writing. When she isn’t crafting fiction, Stephanie is indulging her gadget geek side by writing for online technology sites. Her work is regularly featured on the small business blogs for Intuit and Go Payment and she is a featured columnist for SmallBizTechnology.com. She lives in Nashville with her husband. Visit her online at StephanieFaris.com.

Jen Malone is a former Hollywood publicist who once spent a year traveling the world solo, met her husband on the highway (literally), and went into labor with her identical twins while on a rock star’s tour bus. These days she saves the drama for her books. Jen is also the author of the middle grade novels At Your Service and The Art of the Swap, coauthor of the You’re Invited series, and wrote the YA novels Map to the Stars and Wanderlost. You can visit her online at JenMaloneWrites.com.

Gail Nall lives in Louisville, Kentucky, with her family and more cats than necessary. She once drove a Zamboni, has camped in the snow in June, and almost got trampled in Paris. Gail is the author of the middle grade novel Breaking the Ice, the coauthor of You’re Invited and You’re Invited Too, and the author of the young adult novel Exit Stage Left. You can find her online at GailNall.com and on Twitter as @GaileCN. Visit her online at GailNall.com.

Dee Romito lives in her hometown of Buffalo, New York, where she and her family are steadily checking items off their own bucket list of adventures. You’re likely to find her at the local ice cream shop, writing at a café, or curled up on the couch with her cats. And while she does her best to be a grown-up most of the time, giggling with her BFFs is still one of her all-time favorite things. To join the fun and create your own bucket list, visit TheBFFBucketList.com.

The Rafflecopter giveaway is for a free hardback copy of Best. Night. Ever. (signed by Stephanie Faris). The HTML code below can be entered into the HTML code on your blog. Scroll down if you’d just like to link to it.