Constantine Reviews: Hunted by the Past by Jami Gray

I was honored to receive an ARC by the prolific author Jami Gray for an honest review of her new novel:
Hunted by the Past 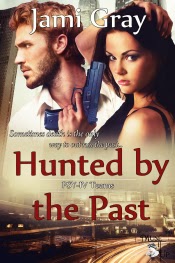 Blurb:
A reluctant psychic who can relive the past, a man well versed in keeping secrets, and a psychopathic killer enter a deadly game where the past determines the future.Changing the past is an impossibility ex-Marine, Cynthia “Cyn” Arden, understands all too well. Struggling in the aftermath of a botched mission, which cost her two teammates, her military career, and a fledging relationship, she’s brought home by a panicked phone call. The psychic killer behind her nightmares has escaped military custody to hunt down the remaining teammates, one by one. Next on his murderous list–Cyn. Her only chance at survival is to master the psychic ability she’s spent years denying.The killer’s game brings her face to face with the one person guaranteed to throw her off kilter—the unsettling and distracting man she left behind, Kayden Shaw. Once she believed he’d stand by her side, until he chose his job and his secrets over her. A choice that’s left the scars of the past etched deep on her mind and heart.To survive this twisted game, Cyn must risk trusting her heart and accepting who and what she is, or lose not only her life, but the man she loves.

My Review: When I began to read Hunted by the Past, Ms. Gray's writing abilities had me in awe and quite breathless. Her capability to show, instead of tell, emotional angst, vulnerability, and tension had me rapt from the first paragraph. She writes with such brilliant tactics that I believe there is a Military Unit filled with special psychic Marines. Hunted by the Past is fast-paced, quick witted, and Ms. Gray can surely spin a fascinating paranormal story. And the heat between Cyn and Kayden is an extra bonus that keeps the reader wanting more.

I honestly recommend Hunted by the Past to men and women alike!