The Ghosts of Aquinnah by Julie Flanders

I am honored to have on my blog today a remarkable author, Julie Flanders with the release of her second book: 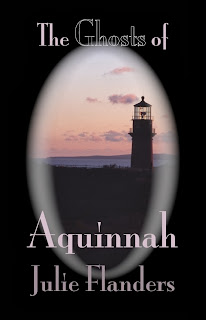 A brilliant flash of light transcends through time.

Another freezes a cloaked figure within a frame of salty mist as waves crash against a rocky shore. Her harrowing expression shadows the beacon to a pinprick.

By the next blaze, she is gone. Only the lighthouse remains.

Hannah’s eyes blink in step with each heartbeat. Images of her deceased parents and Martha’s Vineyard explode like firecrackers inside her mind.

She shakes her head.

For weeks this eerie woman dressed in nineteenth century garb has been haunting my webcam, but tonight she stared into my soul.

Casting aside months of research on historic lighthouses, Hannah drives to the coast and boards a ferry.

What is the strange connection she has to this mysterious woman suspended in time?

Buy The Ghosts of Aquinnah at:

1884
Stella pushed back the green wool curtain and stared out the window of the Mayhew home at the steadily falling snow that had covered the cliffs in a downy blanket of white. Hearing a groan behind her, she let her hand fall and turned back towards the bed in the corner of the room. She walked to the bed and picked up a cloth from a basin of water on the bedside table before sitting down next to her patient.
She squeezed the excess water from the cloth and rested it gently on the young man’s forehead.
“Mamaí,” he moaned, as his hand clasped sheets soaked with his own sweat. He continued to repeat the word as if it were a prayer, never once opening his eyes.
Stella wondered what he was saying, if anything. Perhaps it was merely the gibberish of a feverish man. But the word sounded a bit like “mammy” or “mommy” to her, and she couldn’t help but think that the man was simply crying out for his mother.
“Poor thing,” she whispered as she took the now hot cloth from his forehead and soaked it again with cool water. She dabbed at his face and chest before returning the cloth to his forehead. She had no idea what else to do for him.
She got up from the chair and walked back to the window as the sounds of the fierce wind outside the lighthouse mingled with the soft moaning of her patient. The snow was coming down harder and it was now impossible to see the ocean beneath the cliffs through the curtain of white that covered the sky. There was no way Josiah would be making it back to Gay Head today.
The keeper’s brick house, which was damp and chilly even on a warm summer day, was freezing now. The winter cold seeped into the core of the cottage and chilled Stella to her bones. Stella shivered at the chill coming through the old window and picked up her blue shawl from the foot of her patient’s bed. She wrapped it around her tightly, grateful for the warmth it provided.
Stella had knitted the shawl herself but she’d never been able to knit as well as her mother. Her mind drifted back to another shawl of dark blue wool that her mother Alma Hammett had knitted for Stella when she was a child. And to the nor’easter that had swept over the island some years ago and left her family stranded inside their Chilmark farm.
She and her parents had gathered around the fireplace of their home, snuggling as close to each other as possible for warmth. Stella’s dog Maxwell curled at her ankles, warming her feet with his thick fur. She had wrapped her thick shawl around her and leaned against her father’s strong shoulder as he read aloud from the family Bible.
Stella could hear the deep and soothing voice of her father Charles as he read the ancient words of the Old Testament. She could see her mother get up from her chair to make coffee to warm the three of them as the fire crackled in the hearth.
The patter of ice hitting the window of the Mayhew cottage jerked Stella back to the present. She wrapped her shawl tighter around her and returned to the chair next to her patient, who had kicked his blankets off of his body and was now shivering from cold. But he was quiet at least, and appeared to be sleeping.
Stella pulled the blankets back up and tucked them gently around his shoulders. She listened to the howling wind outside and ached for the parents that haunted her memories. She chided herself for dreaming of the past. Her parents were gone and nothing she did could bring them back. She was a Winslow now, not a Hammett. And she was alone. 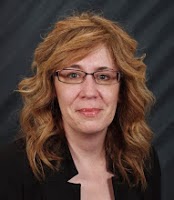 Julie Flanders is a novelist and freelance writer in Cincinnati, Ohio. She has a life-long love affair with the ocean and has spent more summer vacations than she can count on the island of Martha’s Vineyard. When not writing, Julie can be found reading, cheering on her favorite sports teams, and watching too much television. She is an animal lover and shares her home with her dog and cat.