Today I'm Celebrating the final day of the Bloggers Book Fair. I must admit, I'd hopped around to various blogs and discovered many wonderful authors and my summer reading is piling up.

It is my great pleasure to feature one of my fellow Black Opal Book Authors: 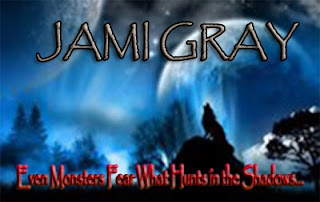 Excerpt from Shadow’s Edge: Book 1 of The Kyn Kronicles:

“You’re going to have to move fast if you want to save your boyfriend, Raine.” It took a second for the words to penetrate through the static. 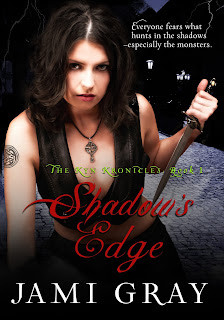 “Who are you?”
“Let’s just say you and I are kin of sorts.” The voice was a vibrating growl.
“Strange, I don’t remember attending a family reunion recently.” Her heart rate kicked up and static whispered across the line even as she struggled to stay calm.
The static cleared. “Perhaps because you have no family left.”
Her blood froze at the words. “What do you want?” Her own voice came out cold, merciless.
“Ah, ah ah,” the voice chided. “No need to get so upset, cher. I just wanted to let you know if you want lover boy to make it out sane, you best starting moving on Dr. Lawson’s little lab.”
“What lab?” she bit out.
There was a huge elaborate sigh. “I’m so disappointed at how slow y’all move. Hasn’t your boss found lover boy’s car yet?” The gruff voice didn’t wait for answer. “Check the glove compartment. I’m sure you’ll find what you’re looking for.”
Her mind raced furiously. “How do I know this isn’t just another little trap?”
The growl rumbled. “You don’t, but since you and I know exactly what’s happening to lover boy, I have a feeling it won’t matter. That Chet character, he was getting way too close, but this one they’re keeping alive for now. He shows promise.” A guttural scream cut through the airwaves, and she felt her breath stop.
Blurb for Shadow’s Edge:
Everyone fears what hunts in the shadows—especially the monsters…

It takes a monster to hunt one, and for Raine McCord, forged in the maelstrom of magic and science, she’s the one for the job. In a world where the supernatural live in a shadowy existence with the mundane, a series of disappearances and deaths threatens the secrecy of her kind and indicates someone knows the monsters are alive and kicking.  Partnering up with the sexy and tantalizing Gavin Durand proves to be a challenge as dangerous as the prey she hunts.

When the trail points back to the foundation which warped Raine’s magic as a child, her torturous past raises its ugly head.  Gavin and Raine sift through a maze of lies, murder and betrayal to discover not only each other, but the emerging threat to them and the entire magical community.

Giveaway***
Jami will give one lucky, randomly picked blog commenter a free e-copy of SHADOW’S EDGE to add to their Summer Reads pile! Let us know what you think of the excerpt…we want to hear from you!

Jami Gray's Bio:
Growing up on the Arizona-Mexico border, Jami Gray was adopted at the age of 14 and suddenly became the fifth eldest of 37 children. She graduated from Arizona State University with a Bachelor’s in Journalism and three minors-History, English, and Theater.  Shortly after marrying her techie-geek hubby (who moonlighted as her best friend in high school) she completed a Masters in Organizational Management from University of Phoenix Oregon.

Now, years later, she’s back in the Southwest where  she’s outnumbered in her own home by two Star Wars obsessed boys, one Star Wars obsessed husband, and an overly-friendly, 105-pound male lab.  Writing is what saves her sanity.
You can find me at:Buy Link:    www.BlackOpalBooks.com
Website:     www.JamiGray.com
Assc. Blog:  www.7EvilDwarves.wordpress.com
Facebook:  http://www.facebook.com/jamigray.author
Twitter:       http://twitter.com/#!/JamiGrayAuthor

You can find all the buy links for both books in all formats at:
www.jamigray.com/books/

Or you can use the following:

Shadow’s Soul:Bk 2 of the Kyn Kronicles 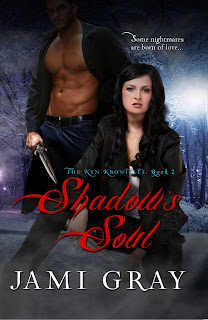 Blurb for Shadow’s Soul:
Some nightmares are born of love…

Raine McCord has no problem taking down the monsters of the world, it’s one of the reasons she’s so good at her job.  So playing bodyguard to Cheveyo, head Magi of the Northwest, as he consults with the Southwest Kyn should be an easy assignment. Unfortunately, simple task turns into a nightmare when Cheveyo is kidnapped and Raine is left for dead by one of the Kyn’s most feared beings, a Soul Stealer.

The Stealer’s attack leaves lasting wounds, undermining Raine’s confidence as a warrior and damaging her unruly magic. Her ability to heal her mind and spirit hinges on the one man who can touch her soul, Gavin Durand.  Compelled to face the emotions raging between them, they must embrace not only their stormy relationship but their evolving magic to escape the twisted threads of murder and betrayal to find Cheveyo.
As Raine and Gavin come together and begin to unravel the complex web of secrets and hidden vendettas haunting the Southwest Kyn, they discover unsettling new truths that threaten their very existence.

I'd like to thank Kayla Curry for all her hard work in organizing the Bloggers Book Fair!

I am so thrilled to have Jami as my guest. Don't forget to comment to be put in contention to win one of Jami's spectacular books!!

Posted by Cathrina Constantine at 12:32 AM