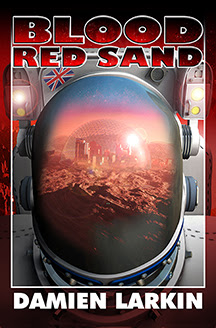 After World War Two, Sergeant McCabe knew the British army could send him anywhere. He never imagined facing down another Nazi threat on Mars.

In New Berlin colony, rivalry between Generalfeldmarschall Seidel’s Wehrmacht and Reichsführer Wagner’s SS threatens bloodshed. The Reichsführer will sacrifice everything to initiate the secretive Hollow Programme and realise his nightmarish future for humanity.

McCabe, Private Jenkins, and the Mars Expeditionary Force must overcome bullet, bomb, and bayonet to destroy the Third Reich. While Jenkins fights to stay alive, McCabe forms an uneasy alliance with MAJESTIC-12 operatives known as the Black Visors. Will this be the final battle of World War Two or the first confrontation in an interstellar war?

I work as a Planning Analyst for a major broadband and tv provider. When I’m not working, I’m either writing or hanging out with my favourite people on this planet - my family!

Normally, I’ll spend a few weeks/months working out the details of a story in my mind (often while writing another project). Once all the threads come together, I let the words pour out without even reading them. From there, I’ll do at least ten drafts, edits and rewrites until I have the story as polished as possible. All of the above involves large quantities of coffee!

Big Red will always be my first love. It’s a story I’d worked on for months before I even put pen to paper (or fingertips to keyboard keys). I was a relative newbie to the writing scene, so when I got my contract from the Rockstars over at Dancing Lemur Press, I couldn’t believe it. It opened so many doors for me and helped me to promote Irish science fiction both at home and abroad.

My favourite character would have to be Big Red’s MC, the unreliable narrator, Darren ‘Dub’ Loughlin. I drew on a lot of my experiences  to craft his personality and he seems to resonate with my readers. He’s an ordinary person trapped in an extraordinary situation, muddling his way through to do the best he can for his family and friends.

Most of my stories are based on my nightmares. I’ve always had a vivid imagination as a child and because of that, I tend to have very surreal dreams/nightmares. The first two chapters of Big Red are based loosely on a particularly terrifying nightmare I had. Likewise, some of the scenes in Blood Red Sand come from recurring dreams that I think come from my Irish Reserve Defense Forces training.

Roughly four and a half months in total, longer if it’s a busy period in work. When the stars align, I can have a first draft done in about three months and then I’ll spend around six to eight weeks on edits and rewrites. I tend to follow what I call the ‘10k’ rule. If I’m struggling with a project and can’t get it past the ten thousand word marker, then I know I still need to flesh out the idea, so I’ll start on something new. I have a folder filled with projects all under ten thousand words that I’ll hopefully get back to one day!

At the moment, I’m working on ‘Born Red’ a direct sequel to Big Red. My eagle-eyed ARC readers for Blood Red Sand spotted the appearance of certain characters and bombarded me with questions. I figured it was time to answer the many queries people had over some of the events in Big Red.

This one is told in a similar format to Big Red and follows Dub Loughlin five years after the end of the first book. Through a series of flashbacks, we learn of the devastating consequences of Operation Salient and the Mars Occupation Force’s escalation of the war against the Hollow insurgency.

Yes, write! Just write! It doesn’t matter if you write four thousand words a day, four hundred or forty. If you write, you’re a writer. It can sometimes be tricky to find time to sit down and write and it’s fine if you can’t some days, as life does find a way of disrupting your plans. Just try not to get into the habit of making excuses. If you have time to watch TV, scroll on your phone or go to the pub, then you have time to write. Do treat yourself to some off-time, but if being a writer is something you want to do, be prepared to sacrifice!

People reading my books and telling me they love them! As writers, we tend to suffer with imposter syndrome. We can get into the habit of questioning our work or putting ourselves down. It’s something I struggled with at the start, always thinking people were being polite. Nowadays, I take the compliment and thank them for checking out my work!

Ha ha ha! I can’t say I’ve ever met a leprechaun, but if I ever do, I’ll ask him to pose for a selfie and send it on to you!

LOL!!! Thanks, Damien! I'm looking forward to that selfie!!! Hahaaa... 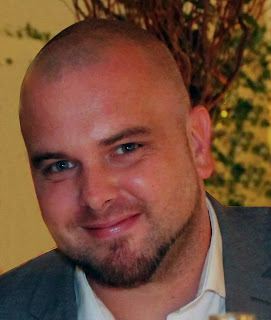 Damien Larkin is an Irish science fiction author and co-founder of the British and Irish Writing Community. His debut novel Big Red was longlisted for the BSFA award for Best Novel. He currently lives in Dublin, Ireland.
http://www.damienlarkinbooks.com/