Announcing the Rafflecopter Winner:
Michelle Willms
Congratulations, Michelle!!!!
You will be receiving an Ebook of
Don't Forget To Breathe


This is a silly little story I whipped up for the Hop:


Shadows creep over Craggmire Road as I inhale the crisp fragrance of autumn, and peddle faster to catch up to Peter. “C’mon, slow down already.”

“It’s getting dark,” he says over his shoulder.

“So,” I say through a chuckle. “You turn into a werewolf or something.” He scowls as I parallel his ten-speed.

“This road freaks me out,” he says.

“Oh. My. God.” I laugh out loud throwing my head back, and put on the brakes. “You believe the rumors, don’t you? Are you pissing your pants because you’re so scared right now?” I straddle my bike seat, toes balancing on the road. “Being new in town is rough. The kids at school are just yanking your chain.”

Peter presses back on the gears of his bike. His rubber tires fishtail leaving a black line on the road. He turns to look at me, but a shadow swallows him. I couldn’t quite make out his eyes as he chases fingers into his windblown hair. “C’mere, I’ll show you how scared I am,” his voice drips with sarcasm.

I’d known Peter for approximately two days, and eighteen hours, and he's adorable. There's something...different about him. I could eat him up. I angle my bike on the road and start to walk. Trees seclude Craggmire road, and cars hardly ever pass through to the dead end, unless they're visiting St. John’s Graveyard. Which is rare since no one’s been buried there in ages. It’s reputation for ghost citing’s is its claimed afame. And since Halloween is tomorrow, I figured Peter might like to indulge in a little spookiest. 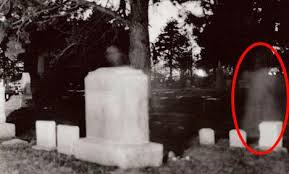 My sneakers crunch over decaying leaves giving off their musky scent. Just to freak him out, I paint a scared look on my face and point toward the dilapidated wrought-iron gates. He jerks and spins around and I can’t contain my snickering.

“Real funny.” He sounds droll, and starts to run after me, growling.

“Haahaahhaaa…” I sidestep his open arms and run to the entrance of the graveyard. Rusty chain-links with an attached lock had been snipped years ago, yet the gate seems frozen in place. I wedge my slim frame through, and ran amid the mutinous weedy grass. Hearing strange grunting, I peek over my shoulder. Peter's having a hard time squeezing through the gates. He's a big boy for being only fifteen, and that’s what I like about him. 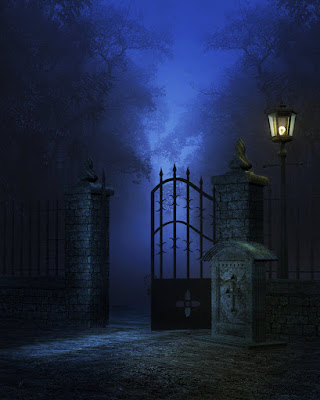 I lope to a very familiar headstone and wait.

“Gotcha!” He wraps his arms around me, but lets go when I didn’t struggle. “Why’d you stop here? A relative or something?”

“Look.” I gesture to the grave marker. It’s carvings deteriorating and faded with time.

“That’s because I never died. Not really.” Moonbeams rain down on him. He smiles, a big open-mouthed grin. Incisors seem to expand into pointed fangs.

Cackling, I hold my arms out to hail the full moon. Suddenly, I morph into my shaggy werewolf self. “Hey, Peter. Let’s get this party started.”

Silly, wasn't it. I hope y'all are enjoying this Frightening Blog Hop!!!


Posted by Cathrina Constantine at 7:00 AM