ARE YOU HAVING SPOOKY FUN YET?

Cathrina's Flash Fiction Story: (this is a revised oldie)
After a romp in the woods with the dogs, the irritating itch began. I was literally going out of my mind. I’d definitely trespassed into a toxic bush or plant of some sort.

Since I resembled a bloated red leper, work was out of the question. Slathering anti-itch lotions and soaking in the tub only magnified the condition. All over my body, I detected erupting, tiny bumps. It appeared like an allergic reaction.
Suddenly, the obnoxious sting became unbearable. My ballooning body felt like it was going to explode. Like a quivering lunatic, I clutched my cell phone and keyed in 911. One mound on my arm gaped open and out crawled what looked like a bug. A bug with wings.

My stomach lurched threateningly, and I swatted at the thing while running to the bathroom. As the intense pain shattered my brain a scream lodged in my throat. Hunched over the commode, an army of arcane insects ripped my skin apart and flit about the tiny room. The ubiquitous throb somewhat subsided. My flesh was a pin-pricked cushion of bloody holes.
I dragged in a choppy, whimpering breath.

Ominous buzzing fed my ears. The walls were no longer peach colored, they were black and undulating. With swarms of bizarre winged insects, the room vibrated. Like ravenous cannibals, they began to devour one another, expanding in size.

I jerked, ready to bolt. The buzzing melted to a low hum. My eyes cut around the room, the insects noticed my presence.

The last thing I heard ~ the bombardment of whirring winged insects. 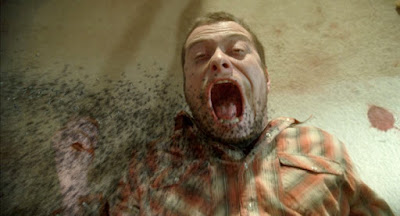