Thank You Alex J. Cavanaugh for bringing back Underrated Treasures!!! 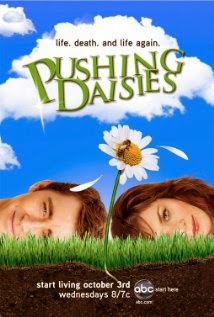 I loved this series! The kid's and I

would actually make a pie, and

gathered round and watch the

I'm a fan of Lee Pace and felt

unique and was crushed when

they cancelled the show!!!

A pie-maker, with the power to bring dead people

back to life, solves murder mysteries with his alive-

investigator, and a lovesick waitress.

Pushing Daisies is an American fantasy comedy-drama tv series. Starring Lee Pace as Ned, a pie-maker with the ability to bring dead things back to life with his touch, and ability which comes with stipulations.

TV Guide included the series in their 2013 list of 60 shows that were "Cancelled too Soon".