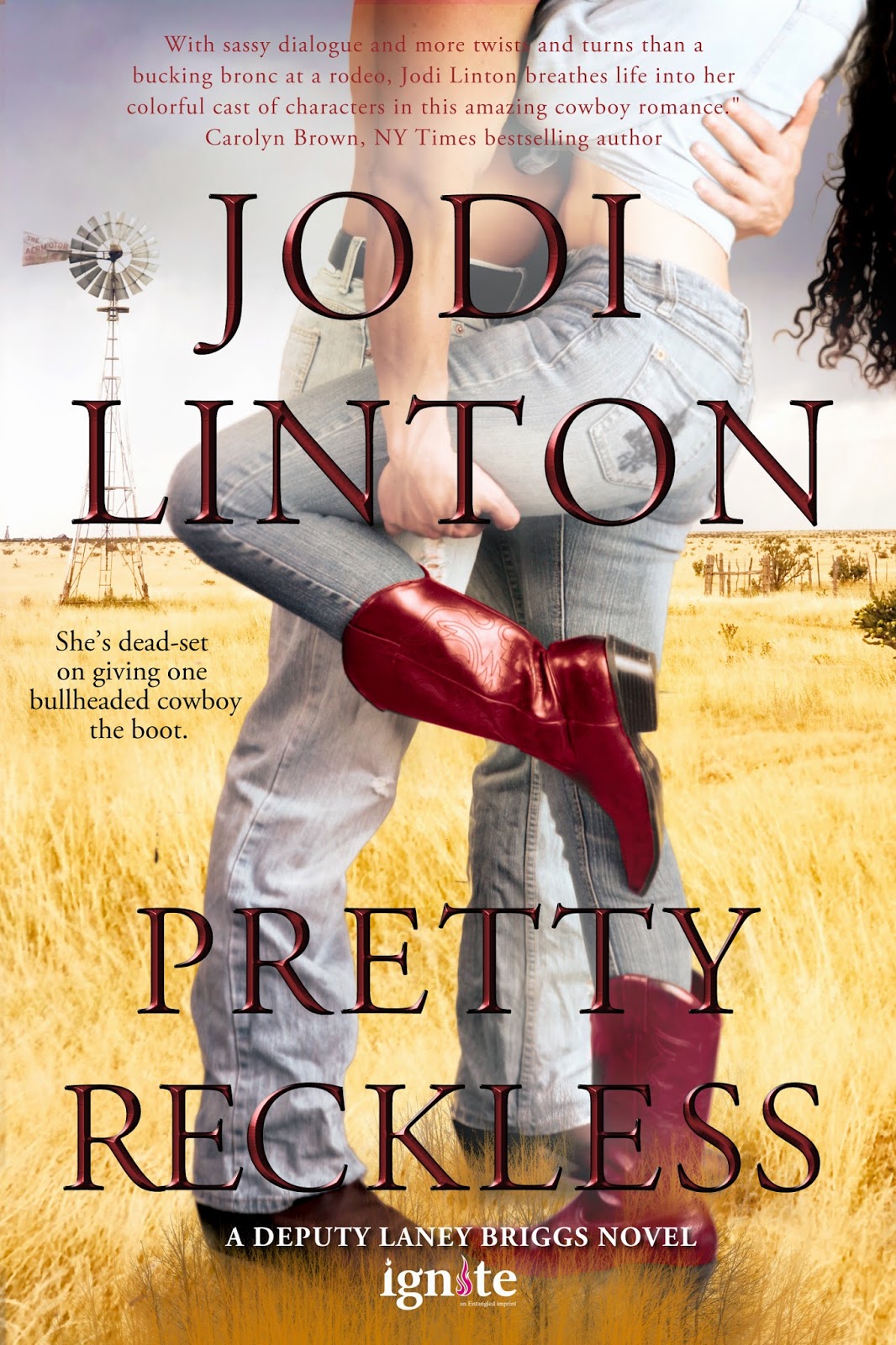 Blurb:
Welcome to Pistol Rock, Texas where everyone knows secrets last about as long as the sporadic west Texas rain showers.


Laney Briggs has long been considered reckless by the denizens of her hometown, but she’s finally turned it all around—she’s happily engaged to the local veterinarian and she’s become a Pistol Rock deputy sheriff. Everything’s fine and dandy—until a dead body turns up and her ex, Texas Ranger Gunner Wilson, decides to stick his boots into the town’s first murder case.
Of course, the troublesome cowboy’s rugged good looks and T-shirt-straining muscles are already leaving Laney knee-deep in hot water, but she’ll be damned if she lets Gunner trample all over her turf. She’s decided that, instead of conflict, she wants a contented, steady life with her vet—a life in which Gunner Wilson and his seemingly endless ability to undermine her resolve and her libido plays no part.
Still, it’s hard to keep her head as forbidden sparks ignite and suspicions arise between old rivals and old flames. And when the bodies start to pile up, Laney has to ask the lethal bad boy for a hand—and a truce in exchange for his help. But after uncovering the pack of lies surrounding not only her job but her heart…
Having an ex-boyfriend as an ally might not be the best idea, but it’s certainly the most reckless, and Laney has always been pretty reckless…

My Review: Jodi Linton is a talented and perky writer. While reading the first page of Pretty Reckless you can't help but smile. Plenty of cowboy boots, hat tipping and rascally, lascivious winks from gorgeous cowboys wearing hip-hugging jeans lace every page. You can almost hear the Texan drawl in her writing. Laney Briggs, a kindergarten teacher turned Deputy Sheriff tries to be rough, tough, and takes no guff. But underneath a hard exterior, Laney's queasy at the sight of a dead body. Who could resist her ex-boyfriend, Gunner who's all cowboy and muscle rolled into a Texas Ranger! For a small town like Pistol Rock  there's a plethora of drama and action. If you're interested in a fast read, spirited writing and action, I recommend reading Pretty Reckless.

Now mosey on over to read Nana Prah's Review of Pretty Reckless.
Posted by Cathrina Constantine at 12:16 AM