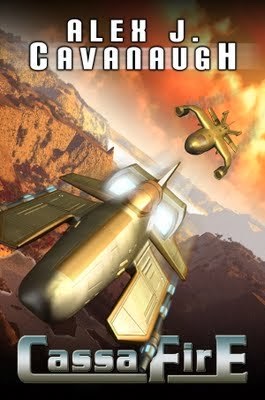 CassaStar was just the beginning...
The Vindicarn War is a distant memory and Byron's days of piloting Cosbolt fighters are over. He has kept the promise he made to his fallen mentor and friend - to probe space on an exploration vessel. Shuttle work is dull, but it's a free and solitary existence. The senior officer is content with his life aboard the Rennather.

The detection of alien ruins sends the exploration ship to the distant planet of Tgren. If their scientists can decipher the language, they can unlock the secrets of this device. Is it a key to the Tgren's civilization or a weapon of unimaginable power? Tensions mount as their new allies are suspicious of the Cassan's technology and strange mental abilities.

To complicate matters, the Tgrens are showing signs of mental powers themselves; the strongest of which belongs to a pilot named Athee, a woman whose skills rival Byron's unique abilities. Forced to train her mind and further develop her flying aptitude, he finds his patience strained. Add a reluctant friendship with a young scientist, and he feels invaded on every level. All Byron wanted was his privacy...

First I must tell you this is the second book in a trilogy. I liked it so much I am now reading the third book CassaStorm, and then I'll go back to where it all started with CassaStar. I do things backwards sometimes.

Alex J. Cavanaugh is a strong and talented writer. His world building sets the stage on so many levels. I like the main character Byron. Even though he comes across as harsh and cold at times, he hides his feelings and love underneath his rough and tough exterior. I especially like the action sequences in space where Bryon kicks into gear. And the love interest Athee is a treat. I can easily see CassaFire on the big screen along with movies such as Star Trek and Enders Games.

Has anyone else read this marvelous trilogy? If not I'd start reading today.

Posted by Cathrina Constantine at 8:47 AM