I'm am honored to host on my blog today the talented and gifted writer Debbie Christiana. A fellow Black Opal Books author, Debbie has penned the remarkable novel, Twin Flames and her newest release Solstice!


Hi Cathy. Thank you for having me as your guest today.

The late, great Ray Bradbury was quoted as saying “Young writers shouldn’t kid themselves about learning to write. The best way to do that is train yourself in the short story.”

I’ve been fortunate to have two dark fiction short stories published and now I’m taking a course on how to write a short story to promote your novel. It’s been a wonderful class and I hope to have my short story, Choose Wisely, up on my website as a free read in October. Wish me luck!

My recently released paranormal romantic suspense, SOSLTICE, is set in the New York Metro area, and is a story of magic, murder, mayhem and of course, love.

My short story, Choose Wisely, doesn’t have the same characters from SOLSTICE, but it does revolves around Mia Leone, a Strega who owns an unusual antique store, named CURIOSITIES in lower Manhattan, a strange man and the very real, but shrouded in myth, Liquore Strega.

Liquore Strega is an Italian liqueur that has been made in only Benevento, Italy since 600 AD. It’s known for it’s bright yellow hue and is sipped after a meal. However it has an important role in the ritual magic of the Strega.

While my short story is dark fiction, it was fun to write and will be perfect for the upcoming spooky Halloween season. If you’d like to know more about the magical Liquore Strega and the craft of Stregheria, check out the blurb and small excerpt from SOLSTICE below. 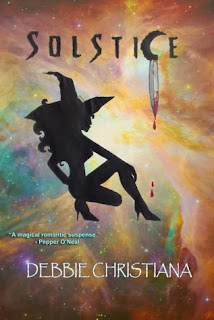 BLURB:
Time is running out for Armend Zogu. The 250-year-old curse on his head will claim his life on his 30th birthday, the winter solstice.

Sofia Palmalosi is just the Strega who can save him. A descendant of a long line of powerful Italian witches; her family’s magic was a gift from the Goddess Diana.

Together Sofia and Armend embark on a journey from New York to Sicily and the ancient ruins of Diana’s Temple, back to New York all the while fighting a battle of magic and wits with a psychopath who wants them both dead and the curse intact.

If the curse doesn’t kill Armend, breaking it just might.

EXCERPT:
“Sofia, are you all right?” Armend asked.
She was pale and her breathing labored. “This particular ritual drains me of my strength. That’s why we eat afterwards. How do you feel?”
“Better than you. But I’m glad to be sitting down.”
Ersilia poured them each a glass of the yellow liquid. “This is Liquore Strega. Bevanda. Drink.”
He was curious about the foreign drink and sniffed its slightly sweet aroma. He took a sip and let the semi-thick liquor settle on his tongue. He savored the bold combination of mint, fennel and a taste he couldn’t place. “That’s good.” He smacked his lips. “What makes it yellow?”
“Saffron.” Sofia took her own sip and closed her eyes. As she swallowed, she let out a happy groan.
Silvio handed Sofia and Armend a plate of food and sat a warm bowl of olive oil between them. “Mangia. Eat. It’ll make you strong again.”
Armend dug into the small, but wonderful feast. The sweet and salty pairing of the melon and prosciutto, the bread, and the sting of heated garlic-flavored oil on his tongue warmed his weary soul.

Debbie Christiana loves to read and write about things that go bump in the night, mysteries and unusual love stories. She’s been fortunate to publish two novels, Twin Flames and the recently released romantic suspense, Solstice, by Black Opal Books. In 2012 she had two dark fiction short stories published in The Ten Tales anthology series edited by Rayne Hall. Debbie is a member of RWA, her local RWA chapter and the International Thrillers Writers, Inc. She lives in Connecticut with her husband and three children.

Thank you Debbie for sharing with us today.

Posted by Cathrina Constantine at 8:22 AM