We begin this summer with a hot novel of Love and Romance. 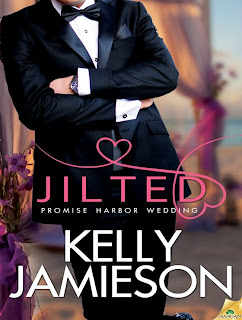 Kelly Jamieson writes about lost and abandoned love, and then eventually requited love. Jilted begins at the altar of matrimony. A past boyfriend barges into the church to carry off the bride-to-be, leaving the handsome fireman, Josh standing there totally flummoxed and, his old girlfriend, Devon looking on somewhat bewildered.
Needless to say the receptions a go, devoid of the marriage vows and the missing bride. Allie, the missing bride is not picking up Josh's cell calls, and for some odd reason he decides to see if Allie has taken her old beau to their honeymoon destination.
Devon and Josh had broken off their heated relationship a year ago, and she was devastated to learn her BFF had hooked up with Josh. Then to make matters worse, Devon is coerced into attending their marriage. Now she finds herself at the reception and decides to go with her old flame, Josh to Greenbush Island, not just to look for Allie, but to see a man about a job.
Allie is nowhere in sight, though, Josh asks Devon to stay at the resort with him since he has the vacation time coming. Devon agrees, though, anguishes all week due to the fact she's still in love with Josh.

Not to add any more spoilers, I must say this novel is on fire with a myriad of steamy sequences that will curl your toes.

Not particularly my best read, though, you might be compelled to love it!

Enjoy a summer of heated fun!

The wedding’s off but the honeymoon is on…

Promise Harbor Wedding, Book 1
Devon can do this. She can show up at her ex-boyfriend Josh’s wedding, even though he’s marrying her ex-best-friend. She can show everyone she’s happy with her fabulous life in Boston, her great career, her amazing shoes — and she can show everyone she’s over him.
Truth is, her life isn’t so fabulous. She’s just been downsized out of her job, her Jimmy Choos won’t pay her mortgage, and…she’s still heartbroken that Josh chose family over her. The real reason she’s enduring this wedding is that her next stop is nearby Greenbush Island, her last hope of finding a new job.
Josh knows marrying long-time friend Allie will make everyone happy after the rough time their families have been through, and since the woman he really wanted to marry chose her career and big city life over him—why not?
But the perfect wedding turns into a perfect disaster when Allie leaves him at the altar for another man. He never saw that coming! But hey, Devon’s there, offering to help him look for Allie on Greenbush Island, where he’d planned their honeymoon. Only, all they find there are their old feelings for each other and a temptation to risk their hearts one more time…
Warning: This book contains a firefighter hot enough to ignite flames, a woman who doesn’t want to get burned again, a honeymoon suite but no honeymoon, and sex not on the beach (sorry).
Buy it here at Amazon
Posted by Cathrina Constantine at 7:30 AM