Where There’s Smoke, There’s Firemen
“Ohmigod!” I vaulted off the couch by the menacing sound of an alarm. The room reminded me of the dance club from last night where I gyrated provocatively, riling up Eugene to the point of madness. Only this time there wasn’t a smoke machine, it was my mom’s kitchen. The first thing I needed to do was to murder that alarm before one of the neighbor’s called the fire department—again!
I tackled a chair, skidding it along the linoleum and climbing up on the seat, I turned off the contraption. “Mom’ll kill me!” I hopped down and darted to the oven in panic mode.
My first mistake was to lean into the oven and pull open the door; a black cloud exploded like an atomic bomb. If Eugene saw me now he’d cackle like a hyena.
I waved my arms like a raving lunatic, and an instant burn hit my eyes making them water uncontrollably. I inhaled a whiff of residue, clogging my throat. I sputtered and coughed.
Scrunching my eyelids tighter than a drum, I groped for the hand towel which normally hangs out on the counter. I clutched the terrycloth and began to flap the air, dispersing smoke to every corner of the apartment. I took a break from flapping the towel to mop the spilling tears from my face. I then jerked to the windows over the sink and cranked them to their fullest. I heard the pitter-patter of rain drops, but I didn’t care.
“Why do these things always happen to me,” I cried.” Then sprinting to every window, I pulled them open, and with towel in hand I directed the smoke like a traffic cop.
I headed back to the kitchen, it looked like waves churning in the ocean. “UGH! What time is it,” I said out loud like I was expecting someone to answer me. I grabbed to two hot pads and slipped out the pan with the charred beef; it looked like a shriveled hockey puck.
Suddenly a flash of light seared through the room, and I heard the clap of thunder. The pitter-patter of rain evolved into a monsoon. Buffeting currents rattled the windows and a deluge of water came sifting through the screens.
I dropped the pan and hustled to the casements over the sink. “No, no, no, this is impossible,” my sobbing carried on the breezes as raindrops splashed my face. I cranked the windows inward, leaving only a crack for the smoke to escape. Then swiveling to the living room, it looked like an indoor fountain. “This can’t get any worse."
As I was tugging on the front window I heard the sirens. Within minutes I saw the flashing red and blue lights of the fire engine stopping at the curb.
“How embarrassing.” I turned my back to the window and padded to the entryway and flung open the door. The hallway was hazy with gray smoke, and some of the neighbors were walking up and down looking for the source.
“It’s okay,” I yelled. “The buildings not on fire—just my roast.” I snorted a chuckle, but they weren’t amused as I watched them shaking their heads and muttering under their breaths.
It’s like the firemen knew exactly where to go. I saw three men tramping down the hallway right to our door.
“What’s it this time, Tatterena?” One of the cute officers asked me. “Bacon, burgers, meatloaf?”
“Roast beef…” I lowered my eyes, mortified.
The three men barged into our apartment looking around. “It could be worse,” said the squatty guy with horned rim glasses.
“I don’t think we’re needed here, guys,” said the cute one. “I’ll meet you back in the truck. I think it’s time I talk to Tatterena about the hazards of cooking grease.”
After the adorable fireman left, I pranced around the room on cloud nine. That's when mom walked in pinching her nose from the onslaught of smoke inhalation. “Not, again, Tatty.” She shook her head, discouraged. Though, when she noticed my expectant eyes she asked, “Why so happy? Because I’m not feeling it right now.”
“Isn’t it a wonderful day?” I said somewhat delirious, in a sing-songy voice. “I have a date, I have a date.” 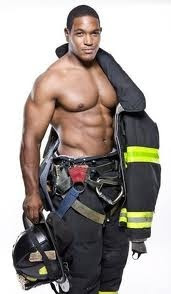 Floating to my bedroom I shrugged on my new jeans and sweater and would wait for the arrival of fireman Ramsey. I thought of the sparkle in his eyes when he said, “Since dinner is ruined why don’t I take you out for a bite.” Could the day get any better?


Posted by Cathrina Constantine at 10:18 PM